The Atholl Memorial Fountain in Dunkeld

The Fountain was funded by public subscription and built in 1866 ‘to the memory of George Augustus Frederick John 6th Duke of Atholl’. The Duke had introduced a piped water supply to Dunkeld, prior to which all water had to be drawn from the River Tay – hence all the wynds leading to the water.

The Fountain was designed by C S Robertson and erected on the site of the Market Cross.

Several changes are apparent over the years, but there is fine detail in the carvings, which include native animals and birds. Masonic symbols are also incorporated – the 6th Duke was Grand Master Mason of Scotland from 1843 until his death in 1864.

The Atholl Family has had a long and significant connection with Dunkeld area and its people.
After the Battle of Dunkeld (1689) much of Dunkeld was re-built and successive Dukes gradually acquired many of the properties during the 18th and 19th centuries. Stanley Hill, now a park, was landscaped by the 2nd Duke in 1730. Duchess Anne, widow of the 6th Duke, founded a girls’ school in 1854 and the building still be ars her name. The 8th Duke was the first President of the National Trust for Scotland and his wife, Katharine, Scotland’s first woman MP, used her Parliamentary salary to renovate some of the Dunkeld houses.

The Little Houses in the Cross and Cathedral Street were given to the Trust by Atholl Estates in 1954. These near-derelict properties were restored by the Trust and the Local Authority to provide homes for local people as well as re-create the 17th-century approach to the magnificent setting of the Cathedral of St. Columba.

Ownership of the Fountain was publicly transferred to the National Trust for Scotland in 1991 in a ceremony conducted by the 10th Duke of Atholl attended by his Atholl Highlanders. The Duke had a long association with the Trust and was its President at the time of his death in 1996. 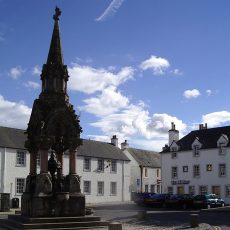 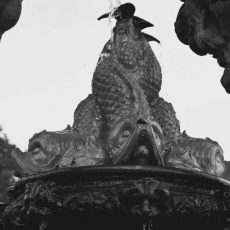 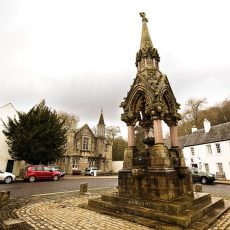 The Cross Dunkeld PH8 0AN