The Tay is not only the longest river in Scotland at 117 miles, but it also carries the greatest volume of any river in the British Isles (more than twice as much water as any other river – approx. 2 x Thames plus the Trent).

Therefore, between the 16thC and 1809 the only options to get to Dunkeld from Perth and the south were either – cross the Bridge at Perth and come round via Meikleour and Caputh. This road entered Dunkeld down what is now Brae Street, and continued down through the Cross, along Cathedral street and north towards Tulliemet and Moulin hugging the slopes of Craigie Barns.

The orientation of Dunkeld was thus: East-West. The other option was the cross by way of a ferry (there were two – East ferry, crossing from roughly the Birnam Oak area, and the West ferry crossing from Inver into the grounds of Dunkeld House). These ferries were dangerous in high waters, and indeed there was a very bad accident with several lives lost in 1766.

The Government was aware of the problem and became keen to build a bridge.

A Bridge at Dunkeld would only be part of a wider look at road-building in Scotland, and in particular the route north into the Highland via the strategic point at Dunkeld. The Wade’s road from Dunkeld built in the 1720s was frankly past it, and so a new route north was envisioned. At the time, the Government worked on a private-public-partnership scheme to undertake such projects: the Government paying half and a local landowner/consortium paying the other. The landowner at Dunkeld was the 4th Duke of Atholl. The price was estimated at £15,000, and the Government stumped up around £7,500.

However, the costs spiralled out of control (where have we heard that one before) and finished up at around £40,000. The Government wouldn’t budge on their contribution, so the Duke has to cough up for the rest – hence the placing of tolls on the bridge.

The Government appointed the famous Scottish engineer Thomas Telford to design the bridge, which is both functional (the heaviest load he could have imagined crossing the bridge would be four horse and a cart, and yet it can carry a 40 ton lorry with a safety factor of over X2) and elegant. It is an arc rather than a hump-back, which was a revolutionary new design, and the Tay was ‘moved’ to allow the contruction of parts of the pillars.

With the building of the Bridge, Dunkeld got two new streets – Bridge Street and Atholl Street, and the alignment of the town turned to a South-North orientation. The road north out of Dunkeld was re-aligned and would evolve eventually into the A9. It would carry the bulk of the traffic into the Highlands until the New A9 by-pass was opened in 1977. 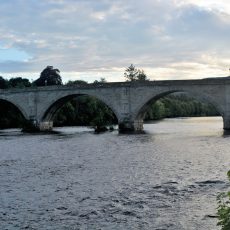 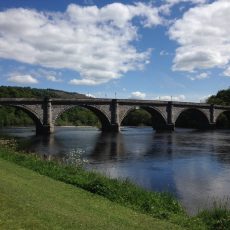 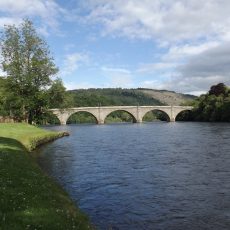