Loch Freuchie offers a pleasant walk in open countryside in a picture-postcard setting, a walk around the loch will take 4-5 hours. The terrain circling the loch can be slightly rough in places, take care when using farm tracks, and watch out for vehicles on the minor roads.

Amulree itself lies almost 306m/1000ft above sea level. Dating from 1744, the white painted church is worth a visit, pop inside to view the information display on the history of the area. The Amurlee Hotel (now closed) became a ‘King’s House’ when General Wade was building the military roads and the old bridge, following that it became a coaching inn.

A small shingle beach offers a great viewpoint for watching the bird life on the loch. The crannog (a man made island) is a stone-built island close to the south west shore near to Glenquaich Lodge, which has been planted with conifers. The Crannog has an interesting dragon legend… The story goes that a young man named Fraoch, at the request of the lady Maidh, went to the dragon inhabited island to gather rowan berries. He completed the task and evaded the dragon but the lady insisted that nothing would please her except that he return to her with the uprooted rowan tree. On his second visit he got the tree but woke the dragon, who in mortal combat gnawed off Fraoch’s arms and legs! Maidh found both lying dead on the shore of the crannog.

Along the shores of Loch Freuchie you will find several sites of ruined communities, something consisting of houses and a mill, the home to 10-15 families. 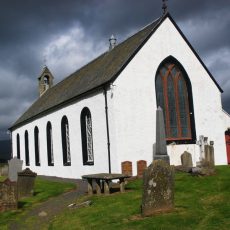 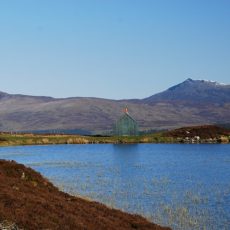 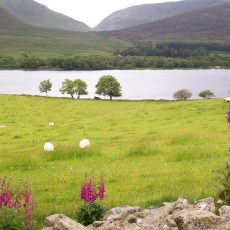